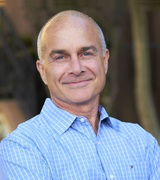 Jeff Blanchard began his real estate career in 2012 with a Morro Bay firm.  Within one year he rose to a top producing agent in that office. Jeff joined Franklin Real Estate & Rentals in 2014, and has quickly found his groove in their Cayucos office.  After moving here in 2003, he spent many years as a licensed handyman before getting into real estate. Jeff’s clients describe him as outgoing, personable, supportive, trustworthy, and hardworking.

Jeff’s roots in California run deep.  Born in Anaheim, he lived in Los Angeles for many years, where he was a successful musician in a rock and roll band on Virgin Records, which allowed him to tour the world.  He managed restaurants and night clubs in Miami, Los Angeles, and Las Vegas.

Jeff lives in Los Osos with his wife and their two daughters.

“I love meeting new people and introducing them to the beauty the Central Coast has to offer!”